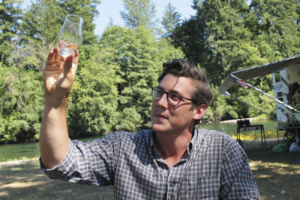 DUSTIN HERB checks the oil level in a glass of Waterford whiskey as he explains how to experience fine whiskey. Photos by Sarah Brown

If he could brag about anything – which isn’t a natural trait, he would say it’s that he got paid to go to school to drink beer and whiskey, and travel.

He was not, actually, a big beer drinker at the time, and he “couldn’t stand” whiskey, Herb said.

“I had to learn to love it, and then ended up loving the process behind it and the culture and the people.”

The plant breeder at OreGro has a side hustle in the pioneer development of terroir in whiskey, a movement started by Mark Reynier, founder of Waterford Distillery in Ireland. 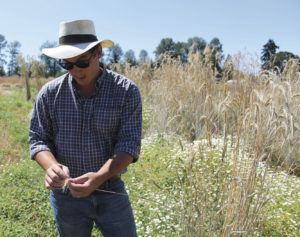 Lebanon native Dustin Herb has become an expert in how the environment affects barley used in creating fine whiskey.

“Terroir is the relationship between the plant and the environment, and how it gets into the flavor,” Herb said. “So that’s our aim here, is to figure out how the barley is interacting with the environment in which it’s being grown, and the management – how it’s being grown – and how that contributes to the final product. In this case, whiskey.”

For centuries, terroir has played a significant role in the wine industry. Consumers look at the year, the “vintage,” of a bottle of wine, and they look at its terroir – where the grapes were grown, Herb said. Knowing each year’s climate in a particular location helps determine the quality of what’s in the bottle.

“So that’s a very similar thing that we’re looking at,” he said. “We’ve grown the same (barley) varieties on the same farms in two different soil types that have slightly different climactic regions in southeast Ireland, and they give different weather patterns.”

For the past four years, Herb and Waterford Distillery have been tracking all the data, including results from their weather stations and soil analyses, and working with a trained panel to define flavor aspects. The distillery would have made its first presentation at the World Distilling Conference in Scotland last May, but it was postponed due to COVID.

Herb’s story starts on the family farm in Lebanon.

He was born into one of the families that founded OreGro, a grass seed company out of Albany. Having always worked on the family’s research farm, it was natural for him to want to study turf breeding, but his dad told him instead to “go into something that somebody can eat or drink.”

That was because they were in the middle of the most recent recession.

“Then the brewing thing, distilling, it all just sort of fell into my lap,” he said.

Following advice from a professor, Dr. Pat Hayes, a barley breeder and genetics teacher at OSU, Herb went to Texas A&M University to get his master’s degree. There, he studied energy sorghum.

“I worked with crushing sweet sorghum and carving out the juice and using ethanol for renewable energy.” 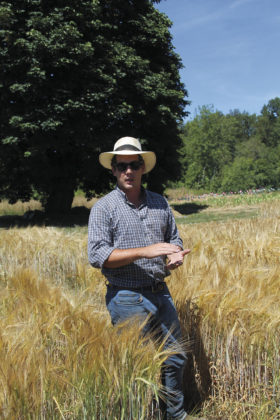 Herb stands in his research plot on his family’s Lebanon farm.

Then he returned to OSU for his Ph.D in the Barley Project under Hayes, researching whether barley varieties and their genetics play a role in beer flavor.

“It’s the first time that anybody ever looked at barley as a major flavor contributor to alcohol production,” he said.

Industry leaders always considered the impact that malt, water, yeast and hops made as contributors of flavor, but never barley itself, he said.

Herb also added to his project the consideration of how the environment and the management of barley affects flavor. In other words, the terroir.

To complete his Ph.D, Herb needed to gain funding and experience from breweries across the U.S. They were called the “Flavor Seven Pack:” Sierra Nevada, Bell’s, Deschutes, Firestone Walker, New Glarus, Russian River, and Summit.

Herb also served an internship at Rahr Malting Company, which afforded him the opportunity to visit and work with some nearby funders on the Flavor Project.

Barley flavor is like the canvas of a painting, in terms of beer, he said. If beer is the finished work of art, then barley is the canvas.
“It’s the backbone, it’s the soul of the beer, a canvas on which these brewers paint.”

Brewers add malts of different intensities, hops of different flavors, different yeasts, and they play with the hardness of the water, he said. All those things add to the way the “painting” is going to turn out.

Now, when terroir is added to the metaphor, it becomes a discussion about whether the painting is on canvas material, printer paper, concrete, stainless steel, and so forth.

“You got different canvases now that you can play with,” he said.

Once his Ph.D was complete, Herb presented speeches on his papers. At the World Brewing Conference in 2016, his dissertation about barley variety and growing environment contributions to flavor was presented, and somebody tweeted it, he said. 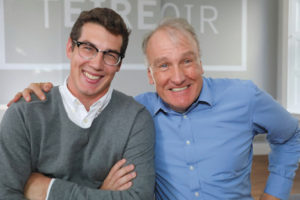 Herb is with Mark Reynier, CEO of Waterford Distillery, which has added Herb to its research team.
Photo courtesy of waterfordwhisky.com

Enter Waterford Distillery. Reynier, the founder, has long touted the claim that terroir affects whiskey flavor, Herb said. Reynier had just started his new distillery when he saw the tweet, and determined he wanted Herb on his team.

“They wanted me to help design some experiments around their production to see if I could classify their terroir. They had already determined for themselves that terroir existed within whiskey, because they could taste it when they were making the whiskey, but they wanted my help to help quantify that.”

Classifying varieties and terroir is a nuisance for some big industry leaders, who have been selecting barley for consistency in their products for centuries, Herb said.

Many barley varieties have about 10 years of high production rates before they begin to taper and are replaced by varieties that have better disease resistance and better agronomics, Herb said. But a few varieties from the 1960s maintain low, yet constant production that brewers love.

“They always say there’s something about this variety, some kind of flavor, some kind of attribute that makes their beers, their product, unique,” he said.

Part of Herb’s Ph.D studies involved isolating the part of the barley’s genes that contributes to that beloved flavor, and mixing it with barley that has better agronomics.

So when they start establishing that barley varieties have different flavors, and add onto that the terroir aspect, the traditional brewers get nervous because they want their product to taste exactly the same from its original release to 500 years from now, he said.

So how do Herb and his team of sensory panelists classify flavor aspects of the same barley variety grown at different locations? The only way to test it is to taste it.

“It’s a really rough job,” he said with a laugh.

In addition, there are highly sensitive gadgets that isolate compounds of flavor in each whiskey, which are sent through an olfactory test. 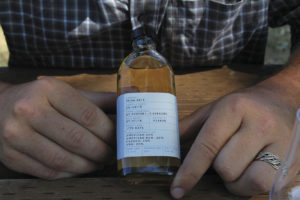 As Herb took a sample pack of Waterford’s first release of whiskeys, he explained how to examine its flavors.

First, he said, the glass of whiskey should be rolled in the hands to warm it up.

“When you move it around, the heat is going to help release its volatiles,” he said. “You want to get the ethanol out.”

After he warmed his glass, Herb swooshed the fluid around and observed the “legs” of oil dripping down, which adds a nice quality to whiskey, he said.

“It kind of helps the flavor sort of linger out and have a nice finish.”

Next, he smelled the whiskey to look for the “soul” of the drink. Does it smell like cereal or grain? Will it taste fruity or floral?

“Seems like a dry fruitiness, like an apricot, a slight apricoty, pruney flavor to it,” he said.

Following a first taste, he gave his interpretation, which, he said, can be subjective and vary based on where you’re at at the moment.

“I can taste cloves and ham. You got a little peppery spice to it. It’s got a nice lingering; it kind of sits on the tongue, especially as you breathe through it.”

A sample from a different farm elicited a different analysis: more peppery, more earthy and herbaceous, more cereal, and not as fruity or floral.

“A good way I describe it is barnyard-y, like wet hay cut in the field. It’s dried, but then it rains a little bit and you get that kind of a sharp, sort of a grassy flavor. So it has that sort of a wet hay, slightly pungent (taste).”

Maybe that’s because the sample came from a farm more inland, where the deeper, heavier soils are, he said.

Herb noted that people who “shoot” whiskey, who  typically consume it quickly, from a shot glass, always in a single gulp, are not actually experiencing and enjoying whiskey,” Herb said.

“They just want to get drunk.”

Distilleries such as Waterford spend time and money to make a product that should be enjoyed, he said.

Granted, novices to whiskey will say it all tastes the same, Herb noted. They’ll taste the burn, the alcohol, the spicy smokiness.

It’s connoisseurs and trained tasters who will notice the subtle differences.

A decade ago, Herb said, he would’ve only tasted the burn, the spicy smokiness, and he certainly wouldn’t have been drinking it for fun.

But here he is now, “just a normal person from Lebanon,” growing grass and training specialists to differentiate flavor aspects of terroir in fine whiskey. It’s been a trip. 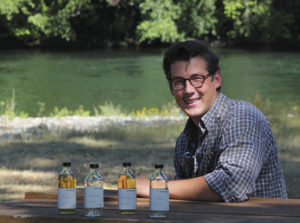 Dustin shows a sample of Waterford whiskeys while sitting at his river-side property.

Addendum: A note from Mark Reynier

“I first learned about Dustin when he published a thesis while at Oregon about the barley flavours, a subject that has been of great interest to me since my days last Bruichladdich Distillery and now at Waterford.

I noticed that during his trials and tests he had somewhat inadvertently demonstrated that the principle of terroir could exists for barley. We got in touch and I explained what I was wanting to do – the definitive proof that terroir exists for barley and the whisky distilled from it; extraordinarily, it appears no one, not even the French, had bothered to proof the concept of terroir; they just accept it as Gospel. So for the last three years we have worked together to do the definite study which will have far reaching implications – a bit of a grenade in the heavily consolidated industry. We are also embarking on a similar trial but for sugar cane and rum in the Caribbean island of Grenada.”