A combine makes a final pass on a grass seed field west of Red Bridge Road southeast of Albany on July 31, 2014. (AP)
By The Associated Press

ALBANY — The grass seed harvest in the mid-Willamette Valley is wrapping up, and local farmers have begun combining wheat and clover fields.

Clare Sullivan, the new seed crops specialist in the Linn County office of the Oregon State University Extension Service, said most farmers she has talked to report a good — but not stellar — yields.

“I haven’t heard much grumbling about yields, so they must not be too bad,” Sullivan said.

“The southern part of the valley got about one-quarter of an inch, and it delayed harvest two or three days,” Sullivan said, “but some areas got a lot more rain, and farmers didn’t get back into the fields for a week.”

Yields seem to be average to slightly above average, Sullivan said.

Some wheat has already been harvested, Sullivan said.

“There was some concern the rain might cause sprout, but I was talking with a field rep and he hadn’t found any.”

Tangent area farmer Dennis Glaser said that his crews were wrapping up grass seed and had started on wheat and clover.

“Our tall fescue did reasonably well, probably a little better than I had anticipated after the dry June,” Glaser said. “There wasn’t a lot of ground moisture to carry crops through.”

Glaser said his perennial ryegrass yields are off about 20 percent from last year, in terms of bulk weight and he didn’t grow any annual ryegrass.

“The wheat looks good, probably about equal with last year, perhaps a little better,” he said. “I’m happy so far with the wheat.”

Wheat prices had been holding above $7 per bushel, but a bumper crop of corn in the Midwest has pushed the price of corn down to about $3.50 per bushel. Wheat prices follow corn prices and have dropped to about $6.75 in Portland.

“Everything’s predicated on corn yield and prices,” Glaser said of the global marketplace.

Nick Bowers farms near Harrisburg and is a partner in KB Seed Solutions. 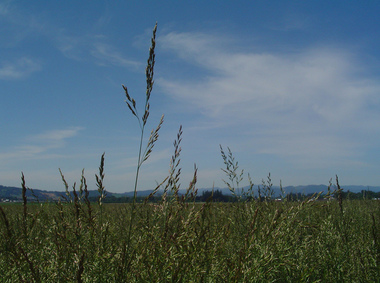 Seed grass grows in an Oregon field in 2007.Tom Brandt/Flickr
“I’m finishing up grass seed today,” Bowers said Tuesday morning. “I have all annual ryegrass. The yields have been pretty good, but prices are down a bit. We hope yields balances out the price differences.”

Bowers said overall seed purchases appear to be a bit sluggish, but he says orders depend a great deal on weather patterns in the south and eastern portions of the country.

“Customers have also begun waiting because they know they can get orders within a week,” Bowers said. “They’re not ordering until they absolutely need it.”

Bowers said he plans to start harvesting clover today and says he never predicts clover yields until it’s in the bin.

“You just never know until you get it in,” he said.

Bruce Pokarney of the state Department of Agriculture said farmers in the northern parts of the valley finished their grass seed harvest at least two weeks ago and have begun burning stubble.

Although field burning was banned about five years ago for virtually all of the mid-valley, Pokarney said it remains allowed on about 15,000 acres in the north valley.

At its peak, mid-valley farmers burned 250,000 acres of grass seed stubble annually. In 1988, a multi-vehicle accident on Interstate 5 was caused in part by low visibility due to smoke and seven persons died. Over the next 10 years, the number of acres burned decreased to 65,000 acres and in 2009, field burning was banned except for a limited area in the northeastern area of the Willamette Valley, primarily in Marion County, on highly-erodible lands.

The original article published in The Register Guard on 8/9/14 can be found here.